There are times when a residential project is of a scope or complexity that hiring a home builder is out of the question. Reimers & Jolivette has completed many significant residential projects in our 87-year history. Our involvement in these projects is usually driven by a need for the professionalism, quality and expertise that only a commercial contractor can provide. We believe we have been included in so many of these projects because a home owner investing both resources and time wants a strong family owned company with deep local roots.

The Parker House, a 30-room, brick, Arts and Crafts home, was designed in 1929 by Morris H. Whitehouse, whose other surviving works include the federal courthouse at S.W. Sixth and Main, the Columbia Gorge Hotel, the University Club, and the Multnomah Athletic Club. Mary Evans Parker chose the site on an expansive lot (since subdivided) across from Reed College as a good place to raise her three children. Whitehouse “created a house with many of the elements common to the Arts and Crafts style,” William Hawkins wrote in Classic Houses of Portland, Oregon, 1850-1950 (Timber Press). “His roof is steeply pitched and central hipped, with a hipped front extension. The upper roof of this extension descends via a catslide over the entrance portal. As with many of the Arts and Crafts houses, a fine decoratively carved lintel spans the opening. All the woodwork is darkly stained, making for a strong contrast with the warm tones of the brick. Massive brick chimneys are located toward the back ofthe house on the north side. The original gardens were designed by landscape architect Florence Holmes Gehrke, and many original trees and shrubs survive today:’ Other features, Elizabeth Usher Groff noted in the Sellwood Bee, are the “signature Whitehouse spiral with ornate wrought iron designs, beautifully carved wood reliefs, and a grand front entrance [making the house] a classic and Significant Southeast Portland addition to Whitehouse’s legacy. 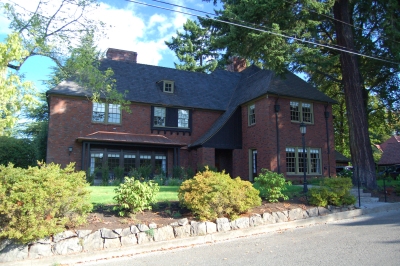 Mary Evans left her native Kansas for Oregon in 1900 and in 1914 married Cyrus Jury Parker, a Missourian who had come to Portland in 1903 with $2.50 and enough drive to become a, nationally prominent contractor. Parker and T. H. Banfield, who met as employees of the Stokes-Zelle contracting firm in Portland, founded the Iron Fireman Manufacturing Company and the Portland Wire and Iron Works, later Portland Wire and Steel. Cyrus Parker died in a plane crash while he was on a business trip in Ohio in 1927. Widowed with three young children, Mrs. Parker carved out her own extraordinary story, taking an active role in her husband’s enterprises. She assumed the presidency of Portland Wire and Steel, a position she held at her death at 75 in 1962. She was active in community and church affairs and her philanthropy financed construction of the Parker Memorial Chapel at the downtown YMCA. Her family grown, she sold the house in Eastmoreland in the 1950s and purchased a home in Southwest Portland. There were several subsequent owners. After the last one moved out at the t,urn of the 21 st century, the home remained vacant with no buyer in prospect until Reed College stepped in late in 2004, with the building and property betraying signs of deterioration.

General contractors Reimers & Jolivette tried to retain as much period architecture as feasible in what preservationists call “adaptive reuse:” They uncovered the original stone mantel after removing 1960’s wood trim and found what appearred to be Whitehouse’s plans for the home in the attic. Air conditioning, a modern kitchen, and elevator were added to increase comfort and public access. Some of Florence Holmes Gerke’s original plantings for the original lawn and gardens, which swept downhill to the edge of the Eastmoreland Golf Course, have survived and served as the foundation for current landscaping. The college intends to use the Parker House as a short-term residence for guests, such as visiting lecturers and members of acaaemic committees, and for campus-related meetings and events. Reed will also make the facility available for community gatherings. The house is well suited for sit-down dinners for 20, and the patio and yard provide ample space for outdoor picnics. Attendees at most events will walk from the campus and gain access through the Woodstock Boulevard gate. Those who drive will be asked to park in Reed’s west lot on S.E. 28th Avenue with shuttle service available as required. The college initially sought to amend its master plan to cover the Parker House but after some neighbors expressed concern over issues such as traffic and parking, decided instead to include the house in a new master plan due to be submitted to the City of Portland early in 2006, allowing more time to address community concerns.